More On The Amazing Wrasse

It turns out that the coral reef fish genus known as the wrasse is even more interesting than I realized when I wrote this post about their amazing ability to change sexes when the male leader of a harem dies. I read in this article, that a paper was published this week in the journal Coral Reefs by Giacomo Bernardi, UCSC professor of ecology and evolutionary biology, which included this video of tool use by a wrasse to crush clam shells.


Well, either that or he's just enjoying a solitary game of clam racquetball.
The animal kingdom never ceases to amaze and delight.
Posted by Nik K. at 12:11 PM No comments:

Coral Fish And Other Exceptions To Nature's Rules. 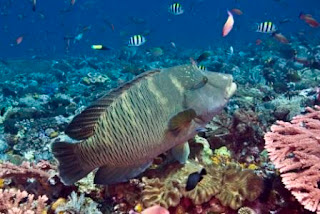 I was watching Animal Planet the other day, a program about species that go through dramatic transformations at some stage of their development and the one that caught my attention was about a species of coral reef fish known as a wrasse. These fish live in groups (harems) of several small females dominated by one large-bodied male. But the interesting thing is what happens when the male dies: one of the female fish will change sexes, their body will completely transform and they will take over the dead male's place. Apparently their genome contains instructions for both genders but the instructions for "male" are only used when the environment dictates it is appropriate.
So I went to see if I could find more information about this and I found an article that says this ability is actually the norm among coral reef fish species.
This kind of stuff always amazes me; the way life will expand to fill every crevice and niche and develop the most incredible specialized adaptions. There's a Radiolab episode about a graduate student who led a scientific expedition to the arctic to explore the sea bottom for new forms of life. Apparently everyone wanted to discover a three-eyed tubeworm, but what they found was field upon subaquatic field of "yellow fluff" a strange new form of microbial life just kickin' it down beneath the arctic ice. Granted it's no three-eyed tubeworm, but it is Life.
Life's incredible adaptations seem to have no bounds. It was just last year that scientists discovered a form of microbial life that was not dependant on the same five elements basic to all known life. It used Carbon, Hydrogen, Oxygen and Nitrogen, but apparently didn't need Phosphorous like every other living thing (Although, there has been some controversy over the study that reached this conclusion).
Given the amazing stubbornness and perseverance of life, and the incredible length of time since our universe exploded into existence, it seems to me that life might be a lot more inevitable and common than we tend to believe.
Posted by Nik K. at 8:53 PM 1 comment: